Not often one gets to be a guest outlaw. Kirstin is hosting me on her blog today. Thanks for the kind words, DivaE, aka KCM, aka Kirstin Cronn-Mills, fellow Flux author!

State of the Union

I need to talk about books, and I haven't had time to blog for a week, but today I have to rant.

I missed the first run of most of Obama's speech because I had night class. However, I heard a good portion of it in NPR while driving home.

This morning, all the news is Republicans railing against Obama and "Obamacare" and other nay-sayers trying to debunk everything Obama sys and does. Does Michelle Bachmann give anyone else a pain in the neck?

My initial reaction, thinking back, is how when I listened to Reagan's and Bush's State-of-the Union addresses, they didn't say anything. I realized that first while listening to Reagan. He used wonderful platitude after platitude, patriotic phrase after patriotic phrase, and when ge got done, there was not one specific issue he had addressed. Bush did the same, --but I wasn't even sure if Bush himself knew what he was talking about in his speeches.

At least Obama has ideas. At least Obama is working for the people of the country, not his own oil or Halliburton investments. At least Obama knows the specific issues that he's taking on. I know, I know, all politics is run by the engine of big money, but he isn't manipulating the lives of thousands of citizens--and soliders!!--to maximize his own profits in his own investments like the last administration.

I keep hearing Republican supporters rail against health care and say "If it ain't broke, don't fix it," when the only people for whom Health care "ain't broke" is the rich who can afford any policy they want and co-pays are not an option! I'm not complaining personally--as a state employee, I have great coverage. But I haven't always, and about half of my students have NO coverage--but with the changes from Obama, they can have their parents' coverage until they're 26, at least.

What is wrong with THINKING about the issues instead of jumping on the bandwagon!??

Mark Twain said "Never underestimate the stupidity of the American people." PLEASE let us not be the stupid people who jump on the band wagon to "get rid of socialized medicine" since it has the tiniest ring of socialism, and--gasp--communism! We desperately need better health care.
Posted by Rebecca (Becky) Fjelland Davis at 4:56 AM No comments:

So....I'm traveling with eighteen other students and teachers to Egypt in May. I'm getting pretty excited now that we're actually meeting as a class and studying Egyption history, mythology, religion, archetecture, and art.
Tonight, we learned how to transcribe our names into Egyptian hieroglyphs, so if you're interested, log on and see how your name looks in hieroglyphs:
http://www.penn.museum/cgi/hieroglyphsreal.cgi
Posted by Rebecca (Becky) Fjelland Davis at 6:48 PM No comments:

I do not think it snowed last night. I think that it got so cold that the sky froze into crystals and landed on the ground--well, not on the ground. On top of the two feet of snow that we already have.
Posted by Rebecca (Becky) Fjelland Davis at 3:47 PM No comments:

An awesome YA review

Lauren's Crammed Bookshelf gave Chasing AllieCat an A+ review and a 5-star Amazon review.
I am honored and humble and grateful. Makes all the hours of work feel worthwhile.
Thanks, Lauren--a Pennsylvania reader and blogger.

http://laurenscrammedbookshelf.blogspot.com/2011/01/chasing-alliecat-by-rebecca-fjelland.html
Posted by Rebecca (Becky) Fjelland Davis at 11:53 AM 1 comment: 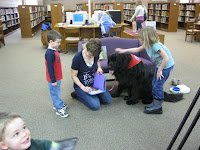 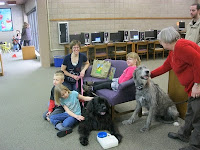 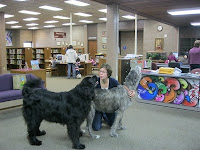 Saturday morning, January 15,
at the Blue Earth County Library.
I read Woof and Wag: Bringing Home a Dog and Freya got to meet all sorts of people and be her happy, gentle, goofy dog self. Her best buddy Maggie came along, too, so the little people who came to story time got to meet two giant dogs: a Newfoundland and a Wolfhound.
Top: signing Parker's book
Middle: hanging out with kids, dogs, and parents after story time
Bottom: Freya and Maggie are seriously checking out the library.
A grand time was had by all.
Posted by Rebecca (Becky) Fjelland Davis at 11:46 AM 1 comment:

But wow, that's the weirdest link I've ever seen.

http://booksobsession.blogspot.com/2011/01/chasing-alliecat-trailer.html?showComment=1295021652267_AIe9_BGLzDpRz-DhfSDW-ICC7mU65BITREdKrio1M9GbMN13Hn1vkOLMPetW5XFcAQV_HLfZ5Yvt8sVTfuYXmFDrUoFv9nk855xlJDdmP0CR-0-9e1_FkCX0-SDLzqSUti8vJCdPjVEScyaG5IaCV-2IHrhVR3lcHhcHW5oOSvcM-clvOGdFZbnZrWJx0Emje1rxr5WDf70tqj6W3EwiC5KwxRiB3OdXqQ3DHoZl61ub0KusAjdr8OQJAz3XuXH88TDdftJxAdQup1MK8w0n5aT2ovGnu_LM7opyL3rOCB0NBQUWdjLBDJWF1me75-oTi-Yp5UNieWskRRDIWudgLql0wlqMjaYpGKhBnTCWNamM1FG6KbRrjGILGRhPMw43gNS-NResrqLgphZaC7_K7rnJTxL-vOj7wchFKTHjvCCIvW_OmDyEGMrC8Tm8xpgrevo_gha3qfOyK5LMq7oFLkSrh1Y_Sl4EbD16biY4U1z5BIf247LDL4wZRwgeKvK6CmfwPHO_t1KUXWxGha17tZQkA8OtIrMBu0yuyXXz171Yhps5UtqZBQo#c7824857691583750436
Posted by Rebecca (Becky) Fjelland Davis at 8:15 AM No comments:

Along with announcing the 2010 Newbery, Printz, Caldecott, etc., awards this week,
ALA--YALSA selected their top 99 Best Books for Young Adults from 2010.
What an impressive list! So proud of Swati Avasthi for making the list,
along with Laurie Halse Anderson, Cornelia Funke, Gary Paulson.
http://www.ala.org/ala/mgrps/divs/yalsa/booklistsawards/bestficya/bfya2011.cfm

Anybody have time to read them all? I would love to...
(And dare I wish to be on this list sometime???)
Posted by Rebecca (Becky) Fjelland Davis at 6:25 AM 1 comment:

Chasing AllieCat featured at FLUX booth at ALA 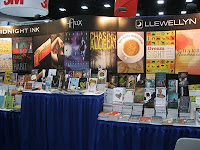 I've never had so much fun feeling like a real author. Signing my book for people excited to read it, meeting awesome YA bloggers who are a blast, hanging with other FLUX authors and FLUX staff--Brian (Acquisitions Editor), Steven (Publicity Director), and Eric(Sales Management).

I've wanted to be an author since I was four years old. It was so important inside me that I rarely talked about it. Somehow, Chasing AllieCat is making me feel like I finally, really, truly am an author.

It doesn't hurt to get to be in 60-degree San Diego weather, either.

http://www.youtube.com/watch?v=IXxnSf1EugQ
Posted by Rebecca (Becky) Fjelland Davis at 11:16 AM No comments: 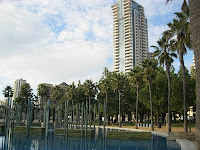 It's 60 degrees here, and people are walking around in sweaters and bundled in down coats. We Minnesotans can't help but laugh!
Posted by Rebecca (Becky) Fjelland Davis at 8:46 AM No comments:

Here's the premiere of the trailer for Chasing AllieCat!

Sara Frederick wrote a story for the Mankato Free Press Mankato Magazine about Chasing AllieCat, and I guess about me. I told Sara that I have realized I'm simply not a calm person, and place helps me center myself, be calm, and write. That's why my little farmhouse is such a good place for me to write. Freya loves it, too--always a boon.

Sara did a great job with the article. She's an amazing writer.

Anyway, one of my goals for the new year is to be calmer. Even when I'm stressed out or have too much to do. Calm. All I can do is try. Right?

Writing and riding my bike daily calm me. School too often takes those two things away. I'm going to work extra, extra hard this year to not let that happen, to keep writing and riding even during the busiest part of the school year.

On a much lighter note, I never published this photo I took in North Carolina when I was there for Thanksgiving. No time like the present, eh?
It cracks me up. If anyone can explain it to me, please do! 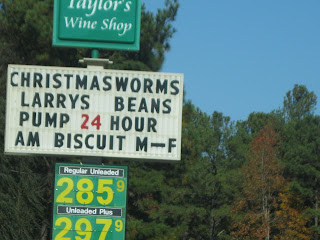 Posted by Rebecca (Becky) Fjelland Davis at 11:49 AM No comments: