Freya came to school with me on Friday. She went as Sirius Black. The sign around her neck reads: "Have you seen this Wizard?" 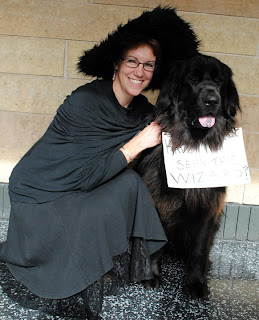 THEN, Saturday morning, I read Halloween stories at the Blue Earth County Library story time. Lots of kids--I bet 60--came and listened--raptly, actually--while I read. Then the Dungeon master, aka Chuck Schoettler, recited his "Twas the Night before Halloween" poem to the kids' delight. 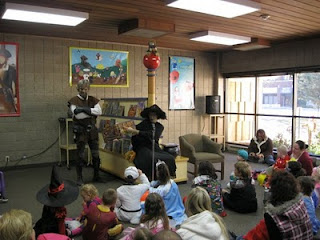 Posted by Rebecca (Becky) Fjelland Davis at 9:42 PM No comments:

Maggie Stiefvater to speak to NASA

Maggie Stiefvater has been asked to give a speech to NASA at the TED conference.
Okay, so now I feel pretty privileged to have heard her as a keynote last week. The phone conversation relaying the invitation is funny. Even she didn't think it was a serious invitation:

http://maggiestiefvater.blogspot.com/
Posted by Rebecca (Becky) Fjelland Davis at 3:38 AM No comments:

If this link works, it's a great blog about what YA readers like in their books. Fun to peruse.

Posted by Rebecca (Becky) Fjelland Davis at 6:55 AM No comments:

Labels: writing for YA, YA literature, young readers

The conference Saturday, held at The Open Book/The Loft all day, was worth every moment, and an absolute bargain for registration fee.

Maggie Stiefvater was the keynote Saturday morning. I'm not the hugest fan of all fantasy books, but her prose sucks me in and her conflicts keep me turning the page. Long and short: I admire her. Fully. Absolutely. I think I dreamed four-leaf clovers while reading Lament.
She's as funny and quirky and smart in person as you'd expect.

She talked about her journey as a blogger/social media user. Good stuff, so I'm all the more committed to continuing this!

Brian Farrey (Acquisitions Editor at FLUX, and my editor for Chasing AllieCat) and Andrew Karre chaired/organized the conference. Kudos to them for doing a superb job. They're both cyclists and book people. Go figure that they'd both be such cool guys. : )
Posted by Rebecca (Becky) Fjelland Davis at 6:14 AM 1 comment:

Crutcher has this to say about Chasing AllieCat:
"A wonderful, tough, TOTALLY believable story about brutality, resilience, friendship under fire and the healing power of athletics. Hang on tight. This is quite a ride."

Thanks, Crutch!
Posted by Rebecca (Becky) Fjelland Davis at 10:20 AM 2 comments:

Llama, llama. Lama.
A young llama lives with two pygmie goats by Tom's dad's barn. Tom's dad found him on the sub-zero night he was born and brought him into the barn. The little guy's ears were frostbitten, and he now has shorter than normal llama ears. Freya and I are friends with all three (llama and goats). When we walk in those woods, we stop on the way, Freya goes nose-to-nose, and I rub Dalai Lama's neck (Yes, that really is his name) and rub the little goats between their horns.

Llamas spit. I know this, and when he starts chortling up his cud, I move out of the direct line of fire. This weekend, however, he was particularly nuzzly and cuddly and wanting rubs, so I let my guard down. Only to get PHLAT! right on the chest and chin. It's green. It' s mostly chewed grass, but it's still a bit phlemy and not exactly pleasant. But still funny.

Dr. Seuss: best "Where do you get your ideas?" answer

Dr. Seuss, when asked "Where do you get your ideas for books?" answered as follows. His answer wins, hands-down, for the best answer I've ever heard to this question. Thanks to Anita Silvey for publishing this in Children's Books and Their Creators, taken from The Horn Book Magazine in 1989.

"This is the most asked question of any successful author. Most authors will not disclose their source for fear that other less successful authors will chisel in on their territory. However, I am willing to take a chance. I get all my ideas in Switzerland near the Forka Pass. There is a little town called Gletch, and two thousand feet up above Gletch there is a smaller hamlet called Uber Gletch. I go there on the fourth of August every summer to get my cuckoo clock repaired. While the cuckoo is in the hospital, I wander around and talk to the people in the streets. They are very strange people, and I get my ideas from them."

Steve Pottenger shot video and photos for the upcoming CHASING ALLIECAT book trailer. He got some good shots! Thanks, thanks, Steve, Mike, David, Jenna, Rachael, and Daryl for coming out! It was fun--and we got to ride Mount Kato!

Oh, I'm afraid this is becoming all too true already. It's great.

(Thanks, Rachael, for sharing this).
Posted by Rebecca (Becky) Fjelland Davis at 3:17 PM No comments:

Between riding on planes and sitting at the hospital, and being quiet at Nikki and Tom's house while baby Alec sleeps, I've read three books since Tuesday.

Percy Jackson and the Olympians: The Lightning Thief by Rick Riordan:
Absolutely loved this story, and want to read more of Rick Riordan's work. The mythology is pretty close to accurate and delightfully reinforces mythical characters and their characteristics; the only obvious discrepancy I note is that Percy (Perseus) is Poseidon's son in the book--which makes for great drama and waterworks--but in the mythical stories, Perseus is Zeus's and Danae's son. That mythical fact (is that an oxymoron?) disturbs me, but not enough to keep me from loving the book and intending to read the rest of the series.

The Graveyard Book by Neil Gaiman:
I have to admit, this is the first Neil Gaiman I've read. I'm sort of embarrassed about that, but I'm fessing up. He's so dark, it's hard to love this book, but still it haunts me, a few days after finishing the last page (sorry for that bad pun). At first, I was disturbed that it won the Newbery--wondering if the overly fantastical life of the dead wowed the Newbery judges into selecting it. By the time I was done, though, I truly loved Nobdoy Owens, and cared deeply for his welfare and success in life--in living, actually. His strange guardian Silas is a delightful character, but made me feel "What? Is the entire world obsessed with the undead and vampires?" Beyond that, it's a very good read. And Gaiman is an artist with language. No question about that.

The Higher Power of Lucky by Susan Patron:
I also have to admit (confessions on a Sunday morning?) that this was my favorite of the three. Lucky is an absolutely indomitable, lovable, bright and spunky character with "voice" bursting the seams of the book. This is one I could read over and over, and the hardscrabble life Lucky lives, and the way her life turns out within the story is one that can and should touch everybody of any age. Her spunk reminds me Clementine. This one I'll use in Children's lit another time.
I also heard Susan Patron speak at the SCBWI conference in New York after she'd won the Newbery. She was so funny and humble and wise that I did open this book with open arms. The story, however, far exceeded my hopes. "Srotum" on the first page causing the book to be banned is just as ridiculous as banning To Kill a Mockingbird.

Now, I need to read another adult book--on to Richard Russo's Bridge of Sighs.
Posted by Rebecca (Becky) Fjelland Davis at 9:35 AM No comments:

Jesus is a fan. WHAT?

Okay, I rarely watch TV (except in July for the Tour de France and other cycling events I get to catch). I remembered why I dislike TV today when a college football game camera panned fan signs. One read, "Jesus is an Oregon fan." GOOD GODALMIGHTY. How stupid are we as a nation to think GOD or Jesus or any deity backs our favorite team because we do and we pray for them to win!? I just had to rant. That made me so mad. It's beyond stupid. It's asinine.
Posted by Rebecca (Becky) Fjelland Davis at 12:37 PM No comments:

I have to put in a little plug for this company from Australia. I love their stuff:
http://www.apresvelo.com/
Posted by Rebecca (Becky) Fjelland Davis at 2:25 PM No comments: