Spring. And punching a dog in the nose.

This past weekend, I got 100 miles in on my bike in three days. Beautiful days to ride, and I only wore long sleeves one of the days.

Friday, going east on Co.Rd. 27 to meet Rachael and David, a black lab chased me. At first I thought I outran him, and had started to ease off my "dog-fleeing sprint," and suddenly, he was right beside me again, snapping at my thigh! I usually grab my water bottle and squirt a chasing dog in the face with gatorade. The sugar/electrolytes don't hurt the dog but startle him and probably sting momentarily, enough for me to get away. This time, the dog was so close, I was sure that if I reached for my bottle, he would indeed get a piece of my leg! So when he lunged for me, I punched him in the nose! He stopped! Who knew? That's a first in my cycling career.

Usually March rides mean full winter gear, fighting biting winds. Riding in shorts was a treat. Can it last? Are we going to get hammered with snowstorms in April? Or will we get the rain we need and slide seamlessly into full-on spring and summer? Who knows!

This morning, the wind is howling outside my window. Freya and I went out and played  "catch me if you can," which is only the precursor to tug-of-war, which is all she really wants to play. I had to come back inside for a stocking hat, it was so chilly. The overcast sky hangs gray and deep and threatens rain--if it were any other winter/spring transition, I'd say the sky threatens snow, but this year, rain seems the only logical outcome. We need moisture, however we get it.

The robins have been back for some time, and the bluebirds arrived last week.  The trees are silver-green against the sky, already popping their buds. It's spring, and it's only March 26.  I love it, but the earliness of the season fills me with some unease.

And now? I have to go do my taxes. Blogging is procrastination. Onward.

Posted by Rebecca (Becky) Fjelland Davis at 7:00 AM No comments:

Barnes and Noble and SCC Readings

Two readings this week, one at the Mankato Barnes and Noble, and one at South Central College.

Both were with Terry Davis; we read from and discussed Girl Meets Boy: Because There are Two Sides to Every Story.  It was fun, and people seemed to both enjoy and take something from the experience. Terry was his stellar teaching self at SCC. Strange and wonderful to be the subject of someone else's blogs. Nicole and Bob (known to me as "Bobbert" are both good friends of mine. 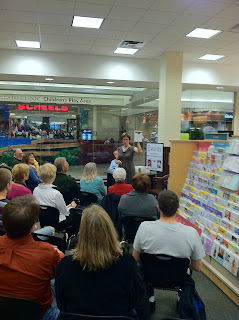 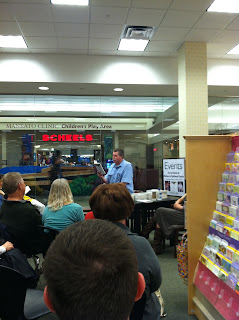 And here are a couple more pictures of the B&N Event.
Posted by Rebecca (Becky) Fjelland Davis at 6:08 AM No comments:

Sometimes, maybe most of the time, life consists of doing what's right in front of us--putting one foot in front of the other, putting out fires, finishing whatever has a deadline smacking us in the face.

I think it's important to step back from that and feel the bigger picture, see the sweeping landscape of our lives and where we are, where we're going, what we want to leave behind when we're gone. That drives us to choose the right paths, the ones we really truly want, for those footsteps that fall one after the other on our daily grind to deadlines, meetings, classes, grades, and hopefully, for me at least, loving my kids and grandson with all my heart, and finally, producing some writing that matters in the world.

My buddy Kirstin Cronn-Mills sent me this article, which I would have missed had she not sent it (Thanks, DivaE). It reminds me of the sweeping contours of a life. George Nicholson is my agent. Although I've certainly had my frustrations with him, most of my frustrations stem more from how slowly I produce a book-length manuscript worthy of publication. He has stuck with me since he first read Jake Riley: Irreparably Damaged and believed in me. Anyway, this accolade is well-deserved, for the career of this literary giant whom I admire so very much. ALAN Award goes to George Nicholson.
Posted by Rebecca (Becky) Fjelland Davis at 10:03 AM 1 comment:

What happened to separation of church and state?

I just read an article about Rick Santorum's campaign, and one woman supporter said, "All our freedoms have come from people who believed in God," and used that as reason to support Santorum. Wow. First of all, what woman with a conscience and a mind can support him? Second, that statement is just dead wrong. I wish we could shout from the rooftops, "Do you wonder why our founding fathers wanted separation of church and state?"
Thomas Jefferson may have been the best mind of our founding fathers. Here's an excerpt from the article linked above in case you don't want to click and read the whole thing:

"Question with boldness even the existence of a god; because, if there be one, he must more approve the homage of reason, than that of blindfolded fear."[1] In Query XVII of Notes on the State of Virginia, he clearly outlines the views which led him to play a leading role in the campaign to separate church and state and which culminated in the Statute of Virginia for Religious Freedom: "The rights of conscience we never submitted, we could not submit. We are answerable for them to our God. The legitimate powers of government extend to such acts only as are injurious to others. But it does me no injury for my neighbour to say there are twenty gods, or no god. It neither picks my pocket nor breaks my leg. ... Reason and free enquiry are the only effectual agents against error.[2] Jefferson's religious views became a major public issue during the bitter party conflict between Federalists and Republicans in the late 1790s when Jefferson was often accused of being an atheist.

...
He also rejected the idea of the divinity of Christ, but as he writes to William Short on October 31, 1819, he was convinced that the fragmentary teachings of Jesus constituted the "outlines of a system of the most sublime morality which has ever fallen from the lips of man."

What a far cry from candidates who believe they are trustworthy simply because they openly declare themselves "Christians."

Posted by Rebecca (Becky) Fjelland Davis at 11:24 AM No comments: