The Lion Farm, a post from June in South Africa (when I had no internet)

June 15,  Glen Garriff Lion Farm near Harrisburg on the way to Barberton. 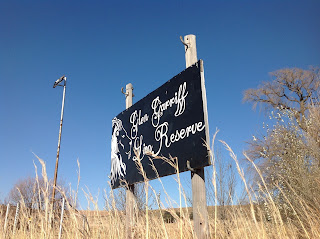 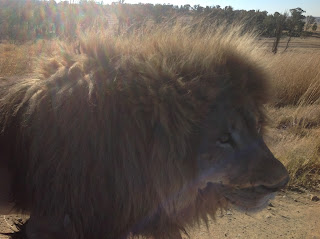 We drove through four locked gates, and in the first lion pen, we were this close...see this big guy reflected in the car?

I drifted back to sleep and was wakened by my alarm at 7. 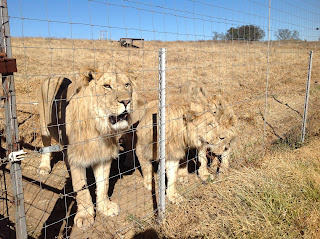 One of the interesting tidbits of traveling off the beaten path is not knowing protocol and plunging ahead anyway. The bathroom which had been assigned as mine had a taxidermied  blesbok  (I think it was...it might have been a springbok or an bontebok, but it as something very small with horns), a bathtub with a spray shower that shot water every direction except straight through the nozzle, a toilet back in a corner, and louvered glass doors through which anyone outside can see in-- and see everything but the tiniest details that goes on within. 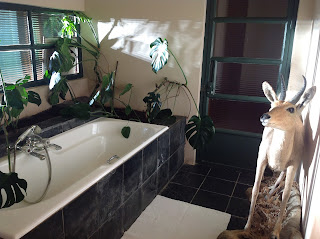 Hence was my confusion about protocol. Should I hang a towel over the door and window? Rush through the fastest shower in history and hope nobody happens past the door? Rising at seven and heading straight to the shower seemed like the best plan. As it turned out, investigating while nobody else was awake, I discovered an exterior door that closed off the entire end of the house where my taxidermic bathroom was located. Case solved. If anyone watched me, I was blissfully unaware. It was awkward anyway, trying to steer the water over my head and body instead of all over the room, so the sooner I was finished, the better. 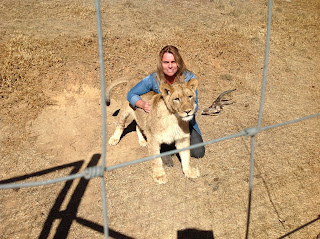 After breakfast and coffee, Scott, Ann, and I walked with Andi Rive, the lion farm manager, on a walking tour to see eight-week old cubs with their mom Sabrina, and on out farther to see the 860 hectares from a higher vantage point. The expanse of Glen Garriff reaches to the closest mountain. 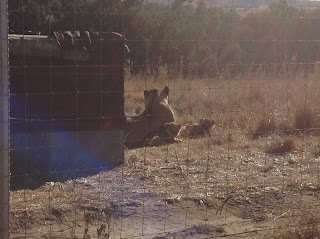 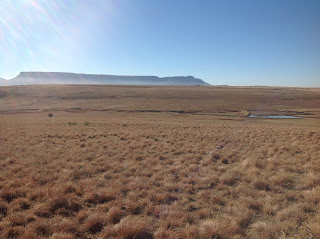 There we saw, from a distance, a dazzle of zebras, a flock of ostriches (did you know that South African male ostriches are brilliant black and white, while the females are brownish gray?), a herd of wildebeest, and a herd of blesbok.
Also on the property, that we did not see, are meerkats, jackals, and bontebok.

Anton Leach, a South-Africa- born Australianfilm-maker, was also staying at Glen Garriff, making a documentary about the lions. Andi, along  with Traci Page Wood, whose father Patrick Shannon owns the farm, is fighting hard for the land and the lion reserve. Lions are a commodity in South Africa: for safari hunts, and for poachers who sell lion bone as a powerful aphrodisiac. How sad and ridiculous is that?

The lion farm has to provide meat for the lions, of course. There are lots of natural prey on the land, but it's illegal to let confined lions kill their food placed in the confinement for that purpose. So there are quite a few flying body parts (into the pens) when feeding time comes. 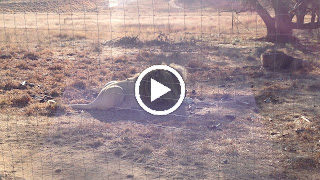 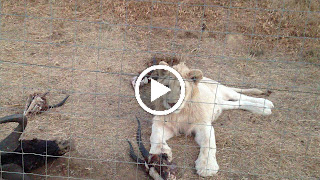 South Africans have a penchant for ending town names with "Fontein" which probably obviously, means fountain.

When we saw a sign for a town called Blesbokfontein, we said, "That's where we just were. Blesbok fontein." Flying blesbok heads...a veritable Blesbokfontein!

Some of the lions were very sweet and friendly. Sky, here, became my buddy. There are NO wild lions left in South Africa, by the way. All of them have been poached or hunted, as mentioned above. So a conscientious lion reserve, where lions are extremely well cared for and healthy, with room to play and run has become their ideal habitat. 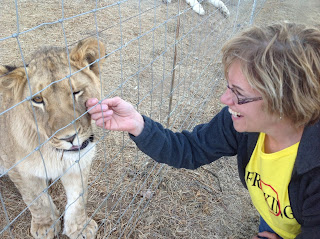 From there, we got back into the car to put on some more miles.  It was tough to leave Glen Gariff. It was one of the many places in Africa where I felt like I belonged...and I felt as if I could just stay forever.
But once more, we piled in the car...
Then our drive to Barberton!
Posted by Rebecca (Becky) Fjelland Davis at 11:24 PM 2 comments: