Summer is zipping past

I haven't felt like much of a writer this summer. With all the traveling I've been doing, my writing energy has been focused on composing the proposal for the NEH Grant "Bridging Cultures" which we are calling "South Africa as a Metaphor for the World: Stories that Help Eliminate Apartheid of the Heart."

I'm excited about the grant, and we are on the last legs of building it.

However, there remains the fact that I have written almost nothing of my own fiction this summer, which is sad.

Inspired by my buddy Kirstin Cronn-Mills trek to Nebraska to gather research, and feeling as if I weren't really a writer this summer, on a whim, I went to Mitchell, South Dakota, and visited the prehistoric Mandan Indian Village dig and museum, went through the George McGovern library, and the Pipestone Monument on the way back. I sort of felt immersed in my Slider's Son story again, and can finally edit and fix, I hope. I found info about the Mandans in the first half of the 20th century that I hadn't been able to find anywhere else. Now that I know where to look, there are books I can use at MSU. But they didn't rise to the surface the way I was searching.

I do love research. And in some ways, this was a spiritual quest as much as anything. Now I'm home, and I don't want to go anywhere ever again. Just kidding, but feeling that way today.

Below is a picture of the stone "Oracle" at Pipestone. See the profile on the rockface on the right? 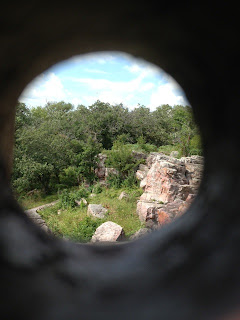 Posted by Rebecca (Becky) Fjelland Davis at 12:16 PM No comments:

The famous TABLE, the famous house


These two pictures probably depict the serendipitous nature of our entire trip to South Africa better than any other pictures could.

Because of winter storms, Table Bay at Cape Town was kicking up twenty-foot swells, and all boat excursions to Robben Island were canceled. As a result, we scrambled for activities to replace that long-awaited trip (and the cable car trip to the top of Table Mountain, also canceled). Our most spectacular bus driver, William, asked Scott and me if we wanted him to call his cousin, a warder at Drakenstein Prison in the Stellenbasch region.

Most people have heard of Robben Island, and Nelson Mandela's 18-year imprisonment there (the largest portion of the 27 years he spent in prison) for leading the African National Congress, and trying to undermine the system of Apartheid. Few, however, unless they are students of South African history, know that Mandela was moved from Robben Island for the last 18 months of his prison term to the prison now known as Drakenstein. There, he was imprisoned in a four-bedroom house with room to move around and a big dining room table where President de Klerk and he could sit and negotiate.

De Klerk would be spirited into the prison by an little-known back road. He was wise enough to realize Apartheid had to end. Sanctions by the United Nations and many parts of the free world were making the legalized racial oppression impossible to maintain. 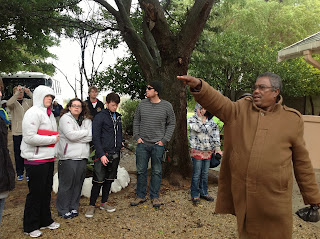 Here, Edgar is pointing out the route used by the President's car coming to visit Mandela in prison. 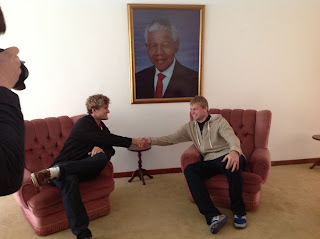 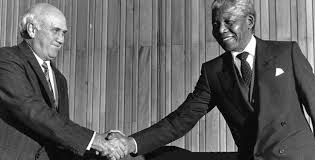 And here in the living room of the Mandela house in Drakenstein Prison, Tyler and Logan reenact the famous de Klerk-Mandela handshake.

The amazing thing about this whole situation is that this prison is NOT open to the public. This is not a place that tourists EVER get to go. It has been maintained, but out of honor to the man, not as a public place.  The fact that we got to go inside, sit in Mandela's chairs, touch his countertops, and be in the place this great man lived inspired awe in all of us. In fact, we all decided that if he had to choose between Robben Island, that all tourists see, and this nearly hallowed place, we would do the same again. 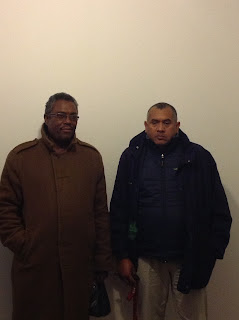 Edgar, the warder who has been at Drakenstein since before Mandela was imprisoned here with his cousin William, our wonderful busdriver who became our dear friend. Their faces depict the way we all felt here. And we owe this amazing experience to the willingness of these two men to stick their necks out and allow a group of American college students an intimate look at the significance of South African history. 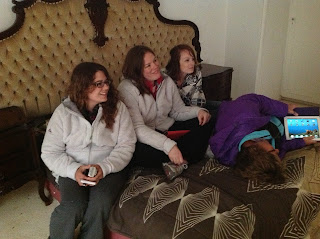 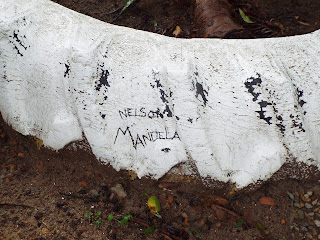 Flower bed outside. Thanks for this pic, Caroline K! 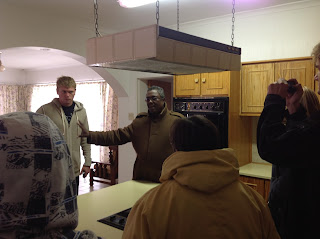 Edgar told us that Mandela had been in prison so long that he had never seen a microwave oven. When we walked into the kitchen in this house, he asked why there was a TV in the kitchen.

Edgar was a "coloured" warder. The coloured warders were NOT allowed to watch the day that Mandela was released.They were secured in one of the prison's other buildings, even though 10,000 people lined the streets to witness the event. How did they know about it? F.W. de Klerk said that Mandela could be released on a Friday. Mandela wanted to be in charge of his own destiny of release, and declared that instead, he would wait until Sunday. In actuality, it gave him two days to contact his underground communication system so the word spread around the world in the two days before he walked free--11 February, 1990. This day in history: Mandela walks free 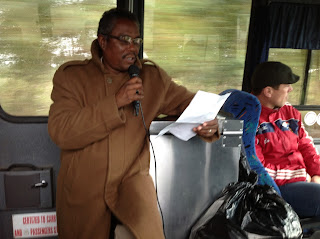 As we left the home, I asked Edgar to read the poem "Invictus" by William Ernest Henley ( the poem that supposedly buoyed Mandela's spirits during his 27-year incarceration.
Morgan Freeman reads "Invictus" 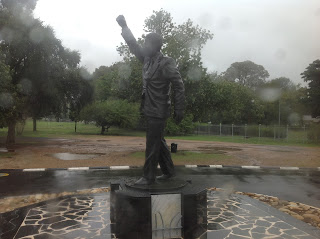 This statue, on the Boulevard leading into (or away from) Drakenstein commemorates Nelson Rohilala Mandela's Long Walk to Freedom.

Did you know: Rohilala was given the name Nelson on his first day of school, by his teacher?

Can you see why I believe the stories of South Africa can inspire us all to be better human beings?